The end of a conundrum

THE BOND-EQUITY DIVERGENCE WAS A CONUNDRUM

For market participants, this divergence in behaviour between the two lead markets was an enigma: how can one market be pessimistic about the future growth regime and another be optimistic? Let’s put it bluntly, if this enigma has not been solved so far, it has indeed disappeared.

Let’s take a quick reminder of the facts. Financial markets are not segregated. It is easy to find high correlations between different assets. Does it imply any relationship? Not for sure. Correlation does not necessarily mean “causal link.” At least, we can conclude from a high correlation between two assets that they react to the same information, to the same indicators.

It is amusing to note that the two major asset classes (equities and bonds) keep watching each other, convinced that the other asset class has insider information. It is common to see equity managers commenting on the bond market and bond managers looking for any information emanating from the equity markets.

This financial logic was largely respected between 2015 and 2018. We observed that higher confidence towards the business cycle led to higher equities and higher interest rates. Conversely, fear of economic slowdown tended to drive down equities and interest rates. 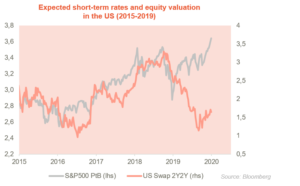 This chart illustrates the divergence that emerged in 2019. The orange line shows the price-to-book of the S&P500 and the blue line, the 2-Year expected rates in two years extracted from the USD swap market.

But in 2019, a divergence emerged for unknown reasons. Indeed, just before spring, interest rate expectations deteriorated as investors changed their scenario towards the upcoming monetary policy decisions in the United States. The economic environment was consistent with this turnaround: advanced economic indicators were weakening, and inflation figures were weaker than expected.

However, on the equity markets side, there was no downward re-pricing, but on the contrary, a re-rating. Clearly, the weakening of the economic cycle did not act as a headwind for equities.

Investors questioned this divergence of behavior, but no one could provide a satisfactory answer. While the data are the same, what can justify such difference of interpretation between the bond market and the equity market?

Then 2020 and the Covid arrived, triggering an unprecedented shock wave that shook up the established order. This conundrum was forgotten. Understanding the divergence of implicit message within financial markets was not the concern of investors in 2020. However, the measures that was taken and the resulting shift of macro-environmental paradigm had tremendous consequences: the divergence between equity and bond markets disappeared and a new indicator was made king. Let’s see how.

It is important to understand that last year marked a turning point in economic and financial analysis. The policy answer to the health crisis has introduced a new analytical framework.  The “whatever it costs” policy has changed the status of the public debt: from a pending financial liability to a public asset serving citizens’ interest. The pricing of interest rates must then be understood in a different way. Because it is necessary – for the system to hold – that nominal rates remain low, tracking nominal interest rates as an indicator of confidence in the economic cycle is no longer relevant. From now on, long-term inflation expectations are the indicator to follow in the bond market. Thus, high economic confidence will move inflation expectations close to the central bank objective (around 2% in the transatlantic world) while economic distrust, which will revive deflationary fears, will result in low inflation expectations.

Let’s look at this component of nominal rates in the developed world. 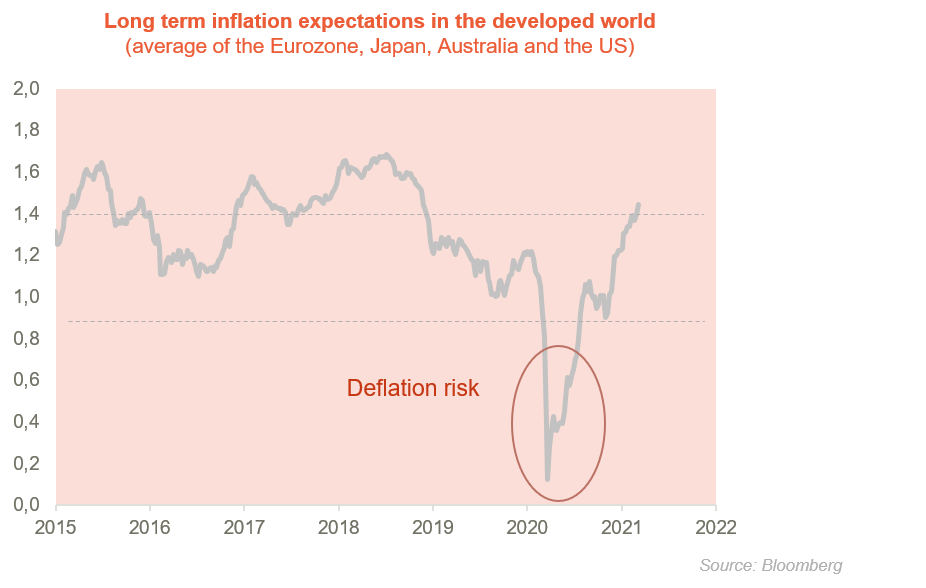 Just before the coronavirus episode, inflation expectations were low, flirting with the lower end of their historical range. Precisely, in 2019, when the unemployment rate in the developed world was at its lowest and economic growth was strong, financial markets refused to price in for a significant inflationary risk premium. On the contrary. This premium was almost inexistent, as if the deflationary risk were structural to the economic and financial landscape. The pre-covid “starting point” was therefore low and the decision to shut down the economic activity (consequence of the containment) led to a collapse of inflation expectations. For financial markets, deflation was no longer a risk but a reality.

Today the mood within financial markets has well changed. Equity markets have realized that the effect of the virus on the economy would only be temporary, but that the public support (monetary and budgetary) will never disappear. After the opening of the monetary Pandora’s box in 2011, that of public spending was even more opened in 2020.

In this context, most compartments of the equity market recovered their pre-covid levels and recently, many of them have recorded historic highs.

Our understanding of our enigma must therefore be reviewed following the Covid crisis. Indeed, if the divergence between equity and bond markets in 2019 was hard to be justified because of interest rates, we can say now that it no longer exists.  There is no longer any divergence of message between the two markets. The equity market is confident in the ability of companies to generate profits in a context of strong nominal growth and the bond market is no longer afraid of deflation.

The shift of paradigm triggered by the covid put an end to this enigmatic divergence thanks to this unprecedented monetary and fiscal interventionism that revigorated inflation expectations.

It seems difficult to return in a world where public debt is under controlled. As quite a symbol, Europe has recently officially abandoned the Maastricht criteria (60% debt/GDP maximum). There will be a before and after 2020. Japan had led the way, the other developed countries have taken the covid situation as an opportunity to follow. There was no other alternative, the response in terms of public policy had to be strong. 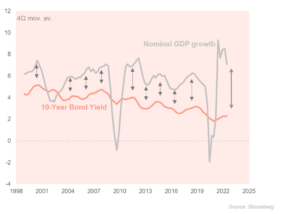 The graph above illustrates the new “playground” of private companies: strong nominal growth and a very low cost of capital. The « carry return » for companies is thus exceptional from an historical point of view. In other words, the macroeconomic regime is very supportive for corporate profitability, which may explain why the equity valuation regime is so high.

Risk scenarios obviously exist, but the current equilibrium seems sustainable, at least in the short term. The fact that the health crisis has pushed back the deflationary risk – which was the number one risk in the world before – is an undeniable achievement for financial markets. Let’s take the time to enjoy it!