The management of the sanitary crisis has led to an unprecedented deployment of public money. We will see what are the transmission channels between monetary authorities, governments and private economic agents.

Before starting, it seems necessary to recontextualize the amounts at stake. To hear that the public debt in France exceeds 2,200 billion euros or that the European Central Bank buys for 20 billion euros of financial assets each month is something irrelevant for most of us. These are intangible amounts.

A very simple way to give sense to these figures is to normalize them by the number of inhabitants: 66 millions for France and 342 millions for the euro zone. Here is what we get for France.

GDP and public debt in euros per capita vs. average gross wage – France 2019

THE IMPACT OF THE HEALTH CRISIS …

The decision to confine economic agents was a painful decision for governments, especially for their finances. In France, support measures led to an explosion in public spending (+ 14.4%) while revenues fell for obvious economic reasons (-6%).

On the monetary side, the European Central Bank reacted quickly by triggering a new wave of asset purchases (quantitative easing* – QE). 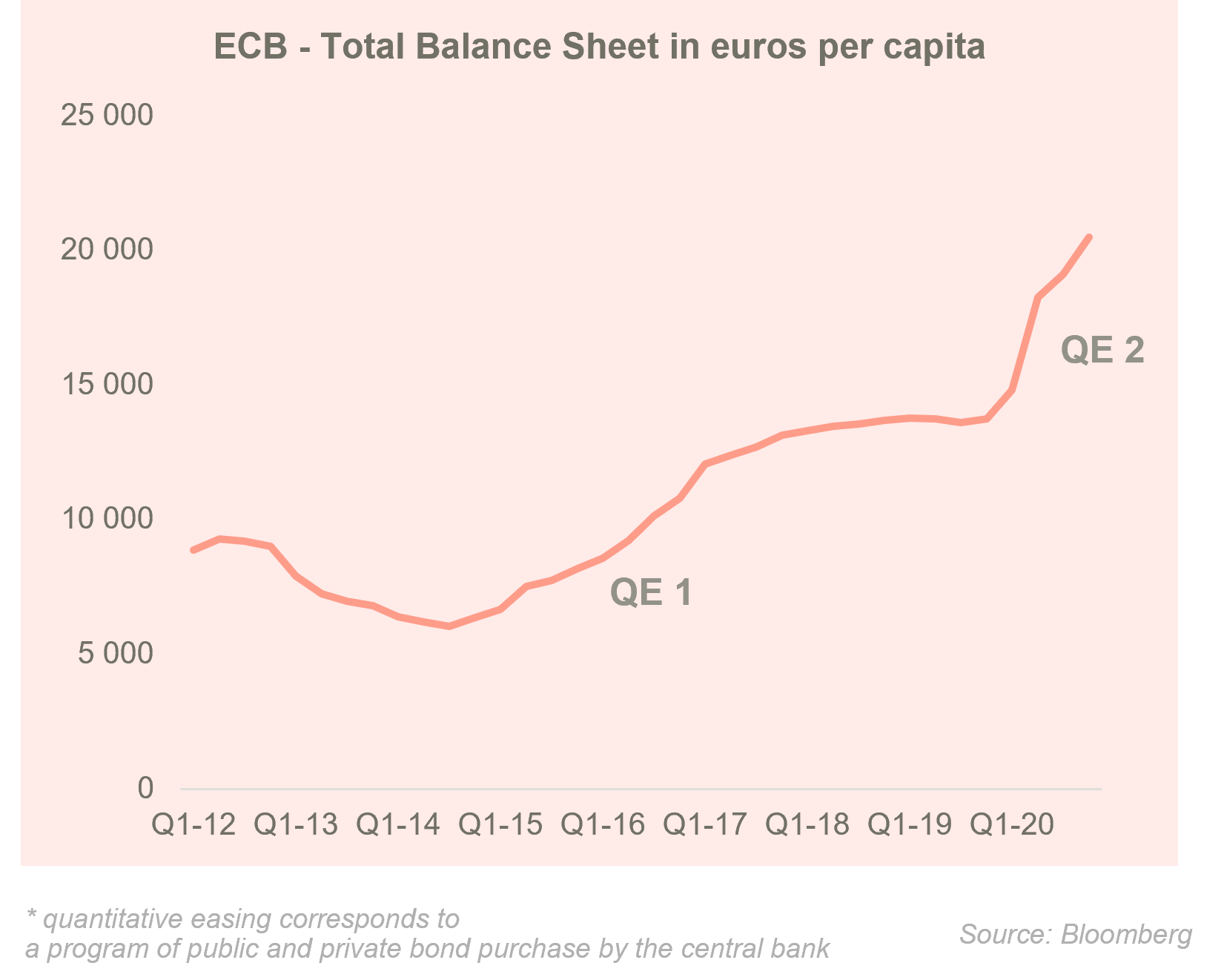 …ON THE ECB’S BALANCE SHEET

2020 was a shock in many ways. A shock to household and corporate income and a shock to public finances. For the central bank, however, we cannot speak of a shock since it has the power to determine alone the size of its balance sheet. It has no immediate constraint in terms of money creation.

We have summarized in the graph below the impacts of the health crisis in the euro zone and compared them to the year 2019, which can be considered as normative. The data presented remains normalized by the number of inhabitants. Social transfers correspond to income not linked to a professional activity; they are public aid.

In 2020, the willingness of governments to ensure some form of continuity despite the pandemic has led to an increase in public debt of more than 3,000 euros per capita. Looking at economic agents, income fell by 206 euros but this drop was more than offset by an unprecedented increase in social transfers of 391 euros. In detail, the drop in GDP last year in the euro zone is primarily due to the increase in household savings rather than the fall in their income.

On the central bank side, the mobilization of resources was exceptional, representing more than 6,700 euros per capita. By way of comparison, during the first QE in 2015 the increase in the balance sheet had represented 5,400 euros per inhabitant but over two years.

The question which then arises concerns the reconciliation of these amounts. If the central bank spent 6,750 euros per capita, that the state was indebted by more than 3,000 euros per capita, why did the income of economic agents only increase by 185 euros (-206 + 391)?

At first glance, one might think that public policy is ineffective, especially in its transmission. We will see that this is not the case, the subject is more complicated.

AN INCREASED MONETARY BASE THAT MUST BE TRANSMITTED

We detail below the increase in the ECB’s balance sheet assets in 2020 by product line. While the purchase of gold seems rather surprising, we see that the purchase of assets represented 3050 euros per capita, an amount very close to the increase in public debt. To think that the quantitative easing program (QE2 = PEPP, Pandemic Emergency Purchase Program) has been sized to ensure the proper financing of European states, there is only a very small step to take. 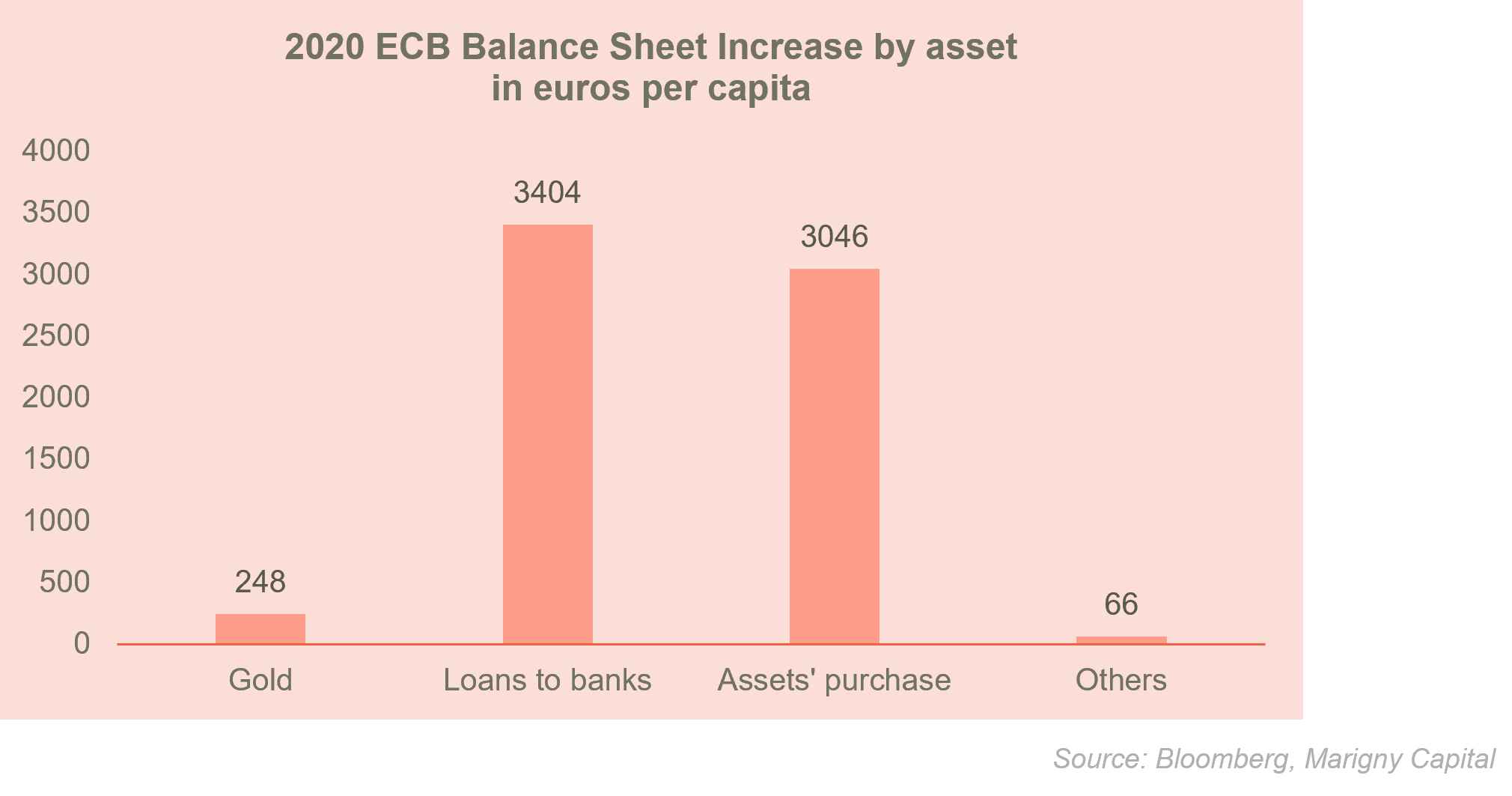 The other important item is the “loans to banks” which represented 3,400 euros per capita. We understand that this is the price of financial stability to avoid a third financial crisis in Europe after those of 2008 and 2010/2012.

To reconcile the increase in public debt (+3080 euros per capita) with the slight increase in social transfers (+390 euros) it is necessary to understand that the increase in the budget deficit covers a wide spectrum of expenditures. Social transfers are only part of it. Furlough schemes have cost a lot, subsidies and time decays for social contributions have been granted. Also, the exceptional expenses related to the purchase of medical equipment also counted (89 euros per French just for masks and covid tests in 2020). In the end, while revenues in the euro area fell by 685 euros per capita, public spending increased by 1,500 euros per capita last year. The table presented previously which shows that income excluding social transfers has fallen only slightly includes furlough compensations. Without these, the loss of income of private economic agents would have been much greater.

The objectives of the central bank are well defined. They are neither to finance states, nor to directly support household income. While full employment is one of the Fed’s objectives, the objectives of the ECB are simply financial stability and price stability (defined by an inflation rate close to 2%). The emergence of the coronavirus in spring 2020 sent shock waves through the financial markets that the ECB wanted to counter with aggressive asset purchases (PEPP). In order to understand the transmission channel of the ECB’s monetary policy, we have diagrammed the main flows between the actors. 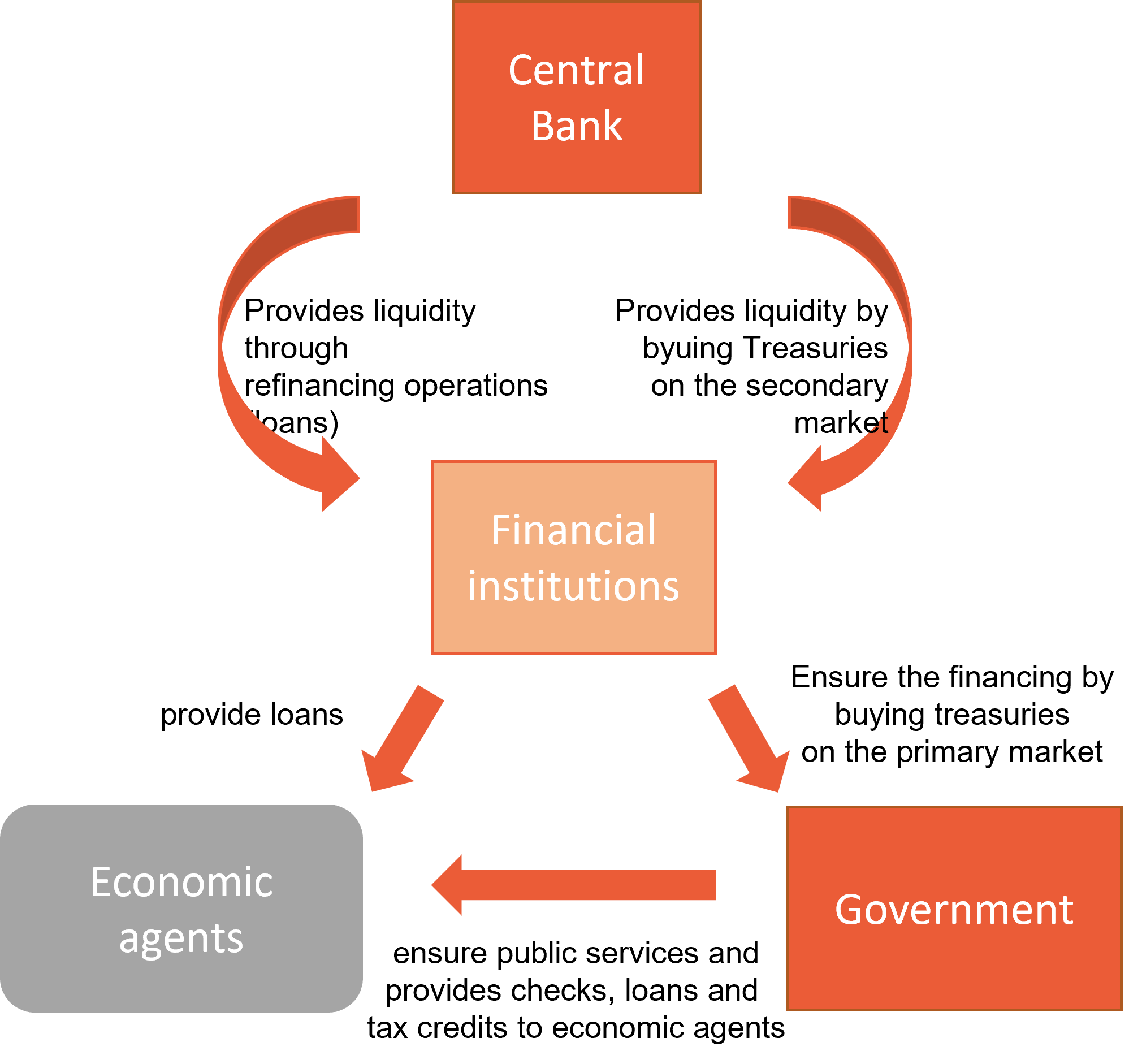 The role of banks is essential in monetary transmission, and particularly in Europe. Because the central bank does not have the right to directly subscribe to the debt issued by governments, it does so in the secondary market. It is therefore the financial institutions, and particularly the banks, that bridge the gap. Banks also provide financing to private economic agents who do not have direct access to markets (households and most businesses).

It is thus understood that in times of crisis, it is crucial for banks and governments to be sufficiently supported to, in turn, support private economic agents. If this is not the case, the crisis becomes systemic and can cause a collapse of the economic system (that situation came close in 2008 when the world banking system was on the verge of chaos).

The management of the sanitary crisis was therefore effective, it is difficult to say the opposite. The institutions have played their part. The central bank ensured the financing of the banks which ensured the financing of the private and public economic agents. Governments have been able to accomplish their sovereign missions, and even partially replace the private sector in aggregate demand. The system held up. If the health crisis was a life-size stress test, the test is successful!

This system is however regularly criticized, in particular because of its centralization. The fact that the state and the central bank are at the heart of the organization hampers the most libertarian. Crypto assets like bitcoin are supposed to free us from this dependence on public authorities. Is this a realistic scenario or hippie 2.0 dreams? Objectively, the institutions seem to us to emerge strengthened from this crisis. But that’s just an opinion …