Equity Market: the US vs. The Rest of the World

Equity valuation has always been a well commented subject in our industry. The notion of fundamental value is dear to many investors who refuse to believe that the equity markets can be just a casino.

Historically, we see that equity valuation ratios move quite erratically. With a macro approach we find variables with more or less significant explanatory power such as inflation, unemployment rate or interest rates. With a micro transversal approach, these are factors such as growth, profitability or risk that have the highest explanatory power.

However, this question of stock valuation remains a puzzle as the instability of the models is great. We present below the price to earnings per share (PER) ratio of the MSCI indices and the recent behavior calls for. 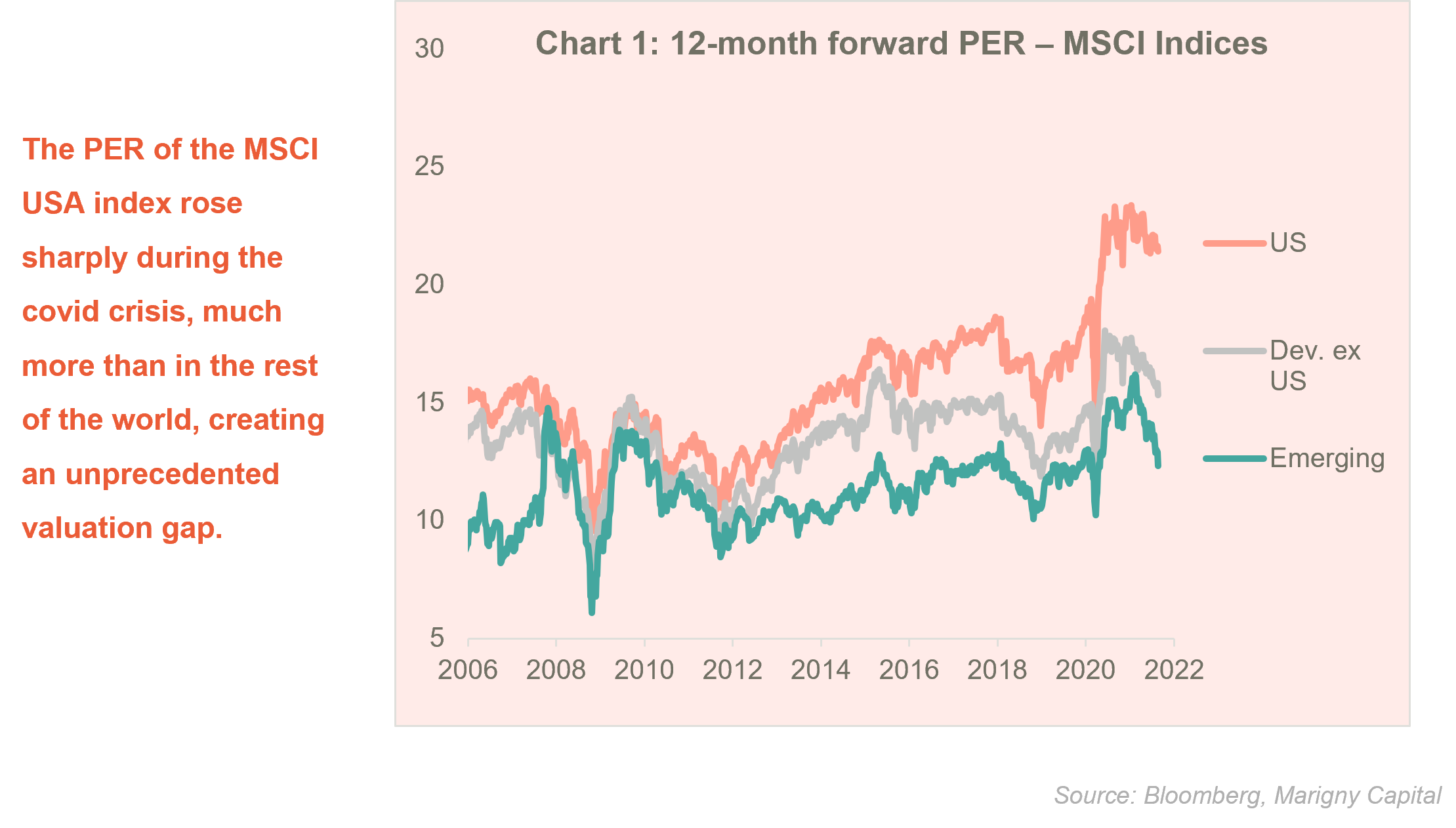 In our “Economic and Financial Outlook” document published a few weeks ago, we presented our central scenario which was based on the idea that valuation multiples would fall. The intuition was that the equity indices needed to digest all the good news from H1 (slight drop in prices, the P) while profits would continue to rebound (increase in earnings, the E), hence ultimately, lower P/E.

So far this scenario is fair enough for many countries such as Japan, emerging countries or some European countries but one exception – and a big one – still thwarts our scenario: the American index..

The MSCI USA does not fall and continues to grow at almost the same rate as expected profits, hence the absence of a drop in valuation multiples.

This divergence between the United States and the rest of the world creates a valuation gap that has never been seen in recent history (see Chart 2 on the next page). Why such a valuation premium? Why now ? We provide some explanations in the following paragraphs. 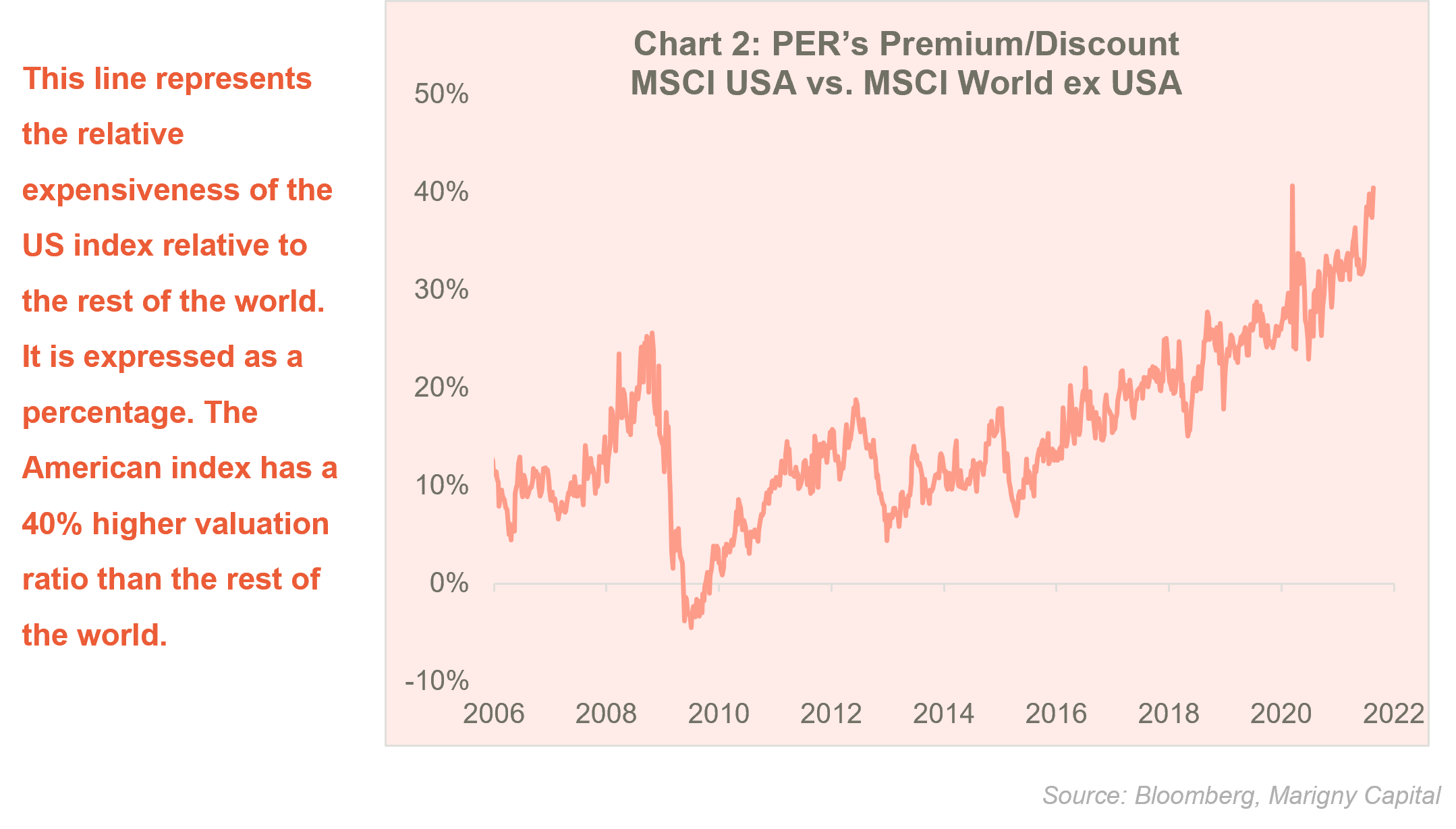 The immediate reaction to such a discrepancy is to blame the tech industry in the United States. But this rationale is wrong for the simple reason that the Information Technology sector is cheaper in the United States than in the rest of the world! This is what we show below: the graph shows the discount or valuation premium by sector. We can see that so-called “growth” sectors such as tech, health and consumer staples do not show a valuation discount. The sectors that penalize the valuation of the rest of the world are the consumer cyclicals, communications and the commodities sectors. Next come the finance and utilities sectors.

Sector composition effects therefore do not really explain the valuation premium. Precisely, they explain a third of it. In other words, two thirds of the discount remains unexplained. 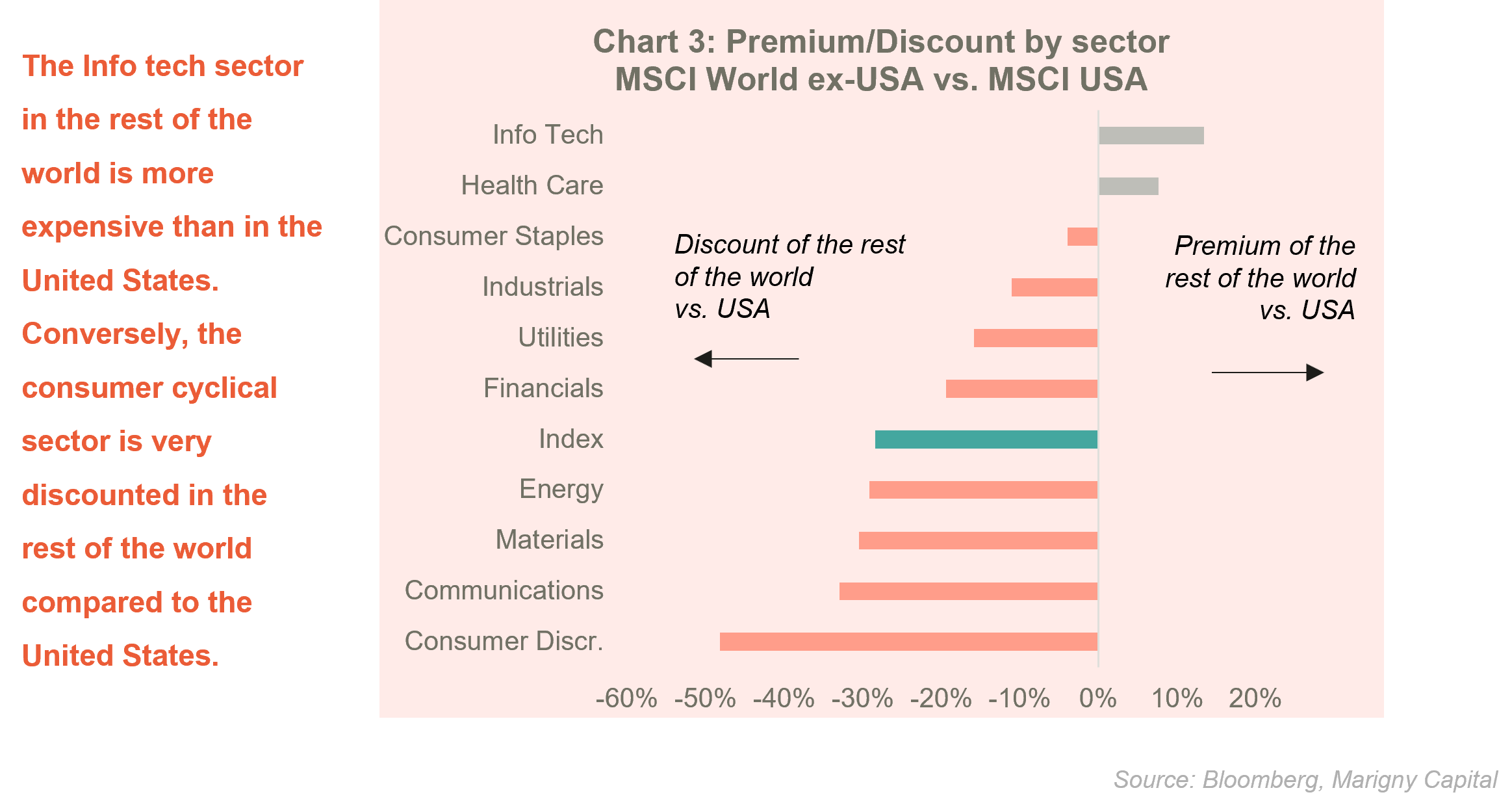 The discount could be justified by better fundamentals. But again, the sector analysis is inconclusive. The most expensive European sectors suffer from a deficit of financial profitability (RoE) while less valued European sectors such as communications or utilities have higher profitability. There is therefore no stable relationship between excess profitability and valuation premium. Clearly, a more profitable company is not necessarily more valued than a less profitable company.

Also, the chart 2 on the previous page shows that the valuation premium of the US index has steadily increased since 2018, but the profitability surplus of American companies has always existed and has not changed in recent years.

WHAT IF WE COMPARE WHAT IS REALLY COMPARABLE?

Because indices and stocks in the United States are different from what we find in the rest of the world, we focused on comparing what is comparable. We have selected American and European companies with genuinely the same business model, operating in similar markets. We selected 7 pairs for our analysis: Nike / Adidas, Nucor / ArcelorMittal, Boeing / Airbus, Walmart / Carrefour, GM / Volkswagen, Verizon / Vodafone and Estee Lauder / L’Oréal. We then built two equally weighted portfolios, one for Europe and the other for the United States and the result is very interesting. 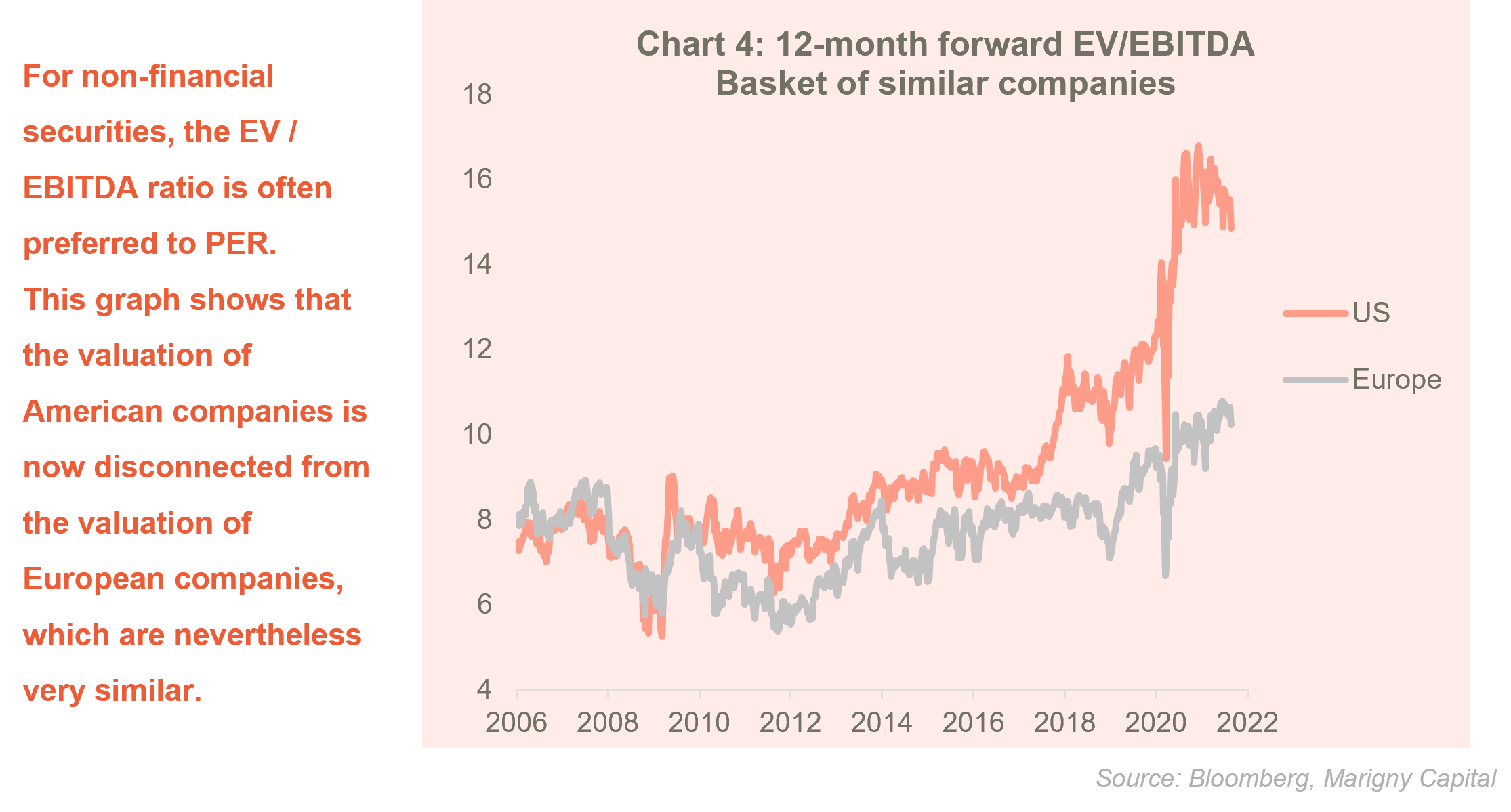 It is interesting because, contrary to what we observed with indices, the valuation has long remained similar between the two baskets. Between 2006 and 2008 there was no valuation differential. The real change appeared at the end of 2017 and then at the beginning of 2020 when the valuation premium exceeded 40%.

With this concrete example we understand that it is useless to look at macroeconomic factors such as interest rates or economic growth to explain the valuation differential. It would be just intellectually dishonest and typical of the “confirmation bias”.

The reality is that there is no objective financial reason for General Motors to be more expensive than Volkswagen while they run a similar activity and are direct competitors. The reasons are of another order. We can hear it everyday in the narrative of investors: the valuation aspects are little discussed. More than ever investors buy a story (or just hope it goes up) they don’t buy because it’s “cheap”.

REASONS FROM A NON-ECONOMIC ORDER

We believe that these are behavioral factors that explain this divergence in valuation. To put it simply, American investors are certainly more risk-taker, more optimistic, justifying their ability to overpay a story.

The very good performance of their equity market could explain this behavior. In the medium to long term the performance of the S&P500 exceeds that of all other indices and therefore defies the notion of risk. It is difficult to lose money with a “buy & hold” strategy. This phenomenon has intensified in this cycle and could justify the lower risk premium required by Americans. It is also a self-fulfilling phenomenon since past performance leads to high confidence which then leads to greater risk-taking.

The higher proportion of individual investors in the United States could also explain this context; they are less sensitive to the notion of valuation and have a higher appetite for risky investment.

Finally, we found that the valuation premium increased in 2017 when the United States embarked on a stimulus and tax cut plan when the economic cycle was very strong. This is certainly another institutional factor that creates a significant moral hazard. If the state is ready to support the economy when it is strong, what will it be when it is weak? We saw it just last year: monetary and fiscal authorities now have extreme “whatever it takes” policies. It is as if all the levers were pulled to make risky assets behave well. That the psychology of investors has been affected by the behavior of public authorities is a credible hypothesis. Contrary to what is happening in China, all measures taken in the United States remain pro-business and the new president has not changed this state of affairs. 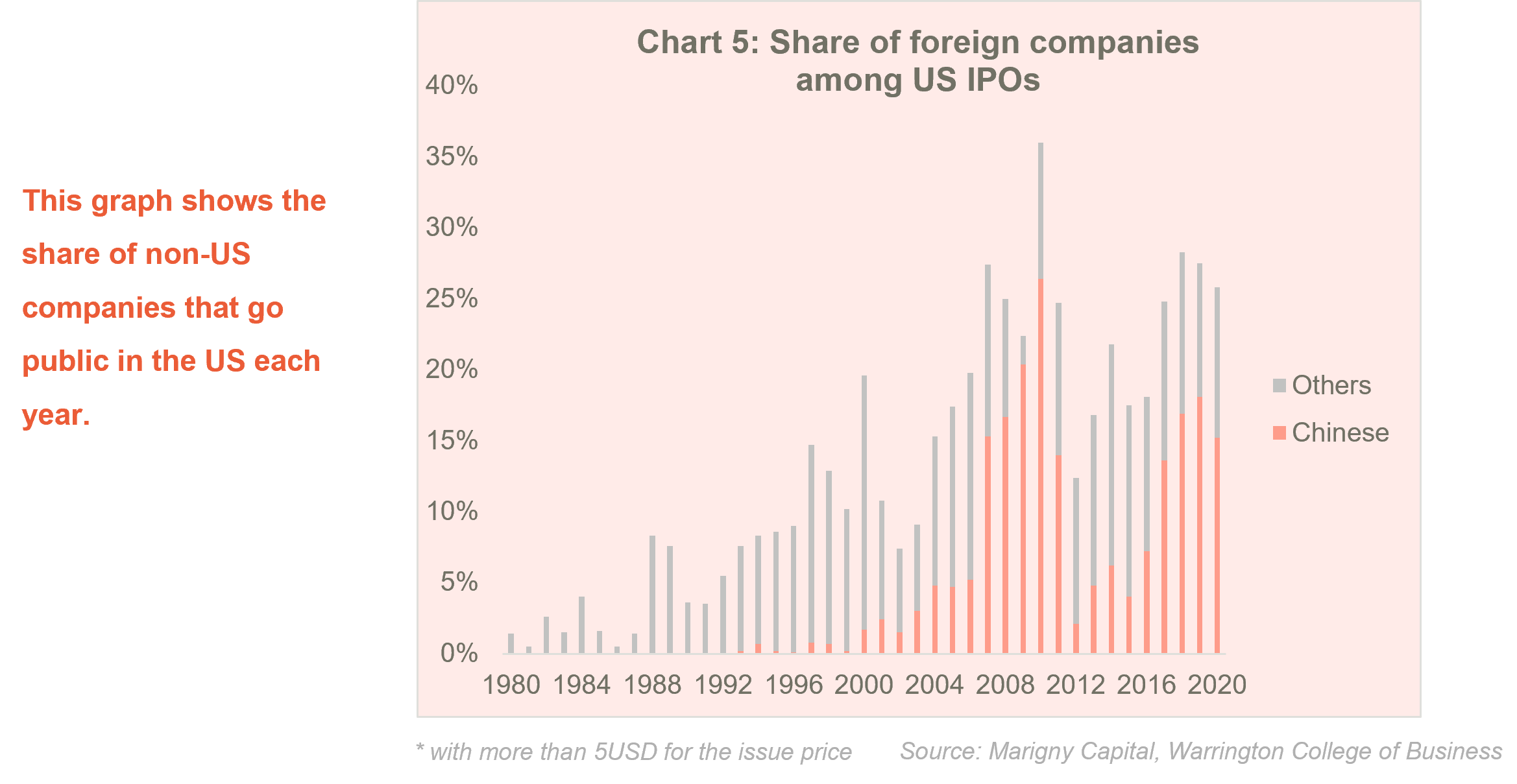 We end with this graph which shows that international companies have clearly identified this ability of investors to believe stories and overpay for companies when they are listed in the United States. There must be some reason behind their preference for the US market over their home market. It is certainly a way to have its share of the American dream for companies and investors alike.