Emerging markets’ growth : where are the profits ?

Emerging countries are appreciated by asset allocators, especially in Europe. The reason is very simple: economic growth is stronger there than elsewhere. This idea that higher economic performance will translate into stronger performance of equity indices is widely accepted. It also legitimates the so-called top-down approach, which consists in analyzing the macroeconomic fundamentals of a country before investing in its benchmark equity index.

This assumption of a close relationship between economic performance and stock market performance is reasonable, but to make it relevant, it is important to verify a few points. Among them, the most important element is certainly the ability of listed companies to transform this stronger economic growth into stronger profit growth.

We touch here on the notion of the profit content of economic growth. Profits are indeed one of the components of GDP. Let’s look at the structure of GDP by type of income (wages, rents, profits, etc.) for example for India and the United States. 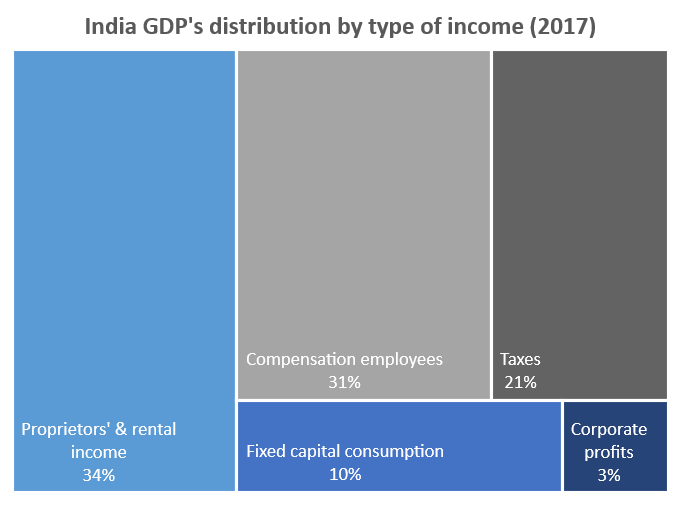 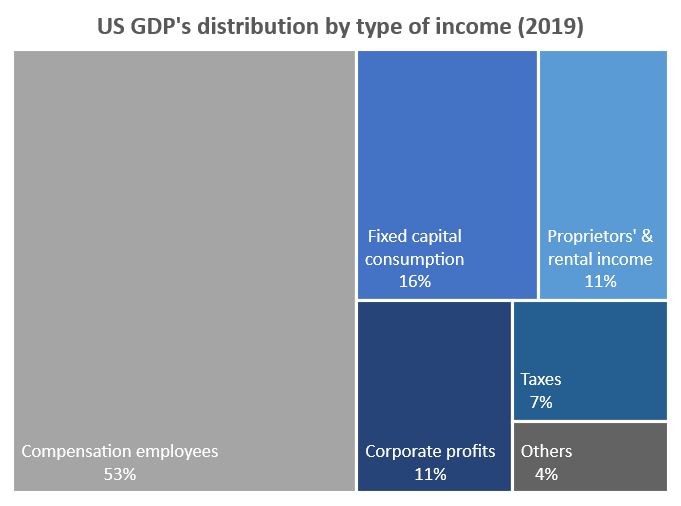 We understand that the profit content is not the same from one region to another: it exceeds 10% for the US economy while in India it does not reach 4%.

To apprehend this notion of content in profits, we calculated the profit growth of the indices of the four BRIC countries (Brazil, Russia, India, China) and we compared it to that of the S&P500. We did the same with GDP growth to then calculate the ratio between profit growth and economic growth. The results are shown in the table below:

How to read this table? Illustration with the indian case:

The diagnosis is very clear. American companies manage to grow their profits at a rate far greater than the growth rate of the GDP of the United States. On the opposite, Chinese or Indian companies fail to do better than the growth of their GDP. The previous table shows the data for the period 2004/2020 but the analysis is even more striking if we look at the last 10 years: 2010/2020.

The profit content of the US growth is clearly higher than in the emerging world.

THE PERFORMANCE OF EQUITY INDICES

The equity markets are affected by macroeconomic factors, but in the medium to long term, the main driver of performance remains largely the growth of profits. It is the dividends (i.e. the portion of earnings that are distributed) which form the basis of the equity valuation. The higher the profits, the higher the value of companies.

The comparison of the indices’ performance between emerging countries and the US confirms this postulate: there is well an American leadership in terms of profits which justifies the historical outperformance of the S&P500. 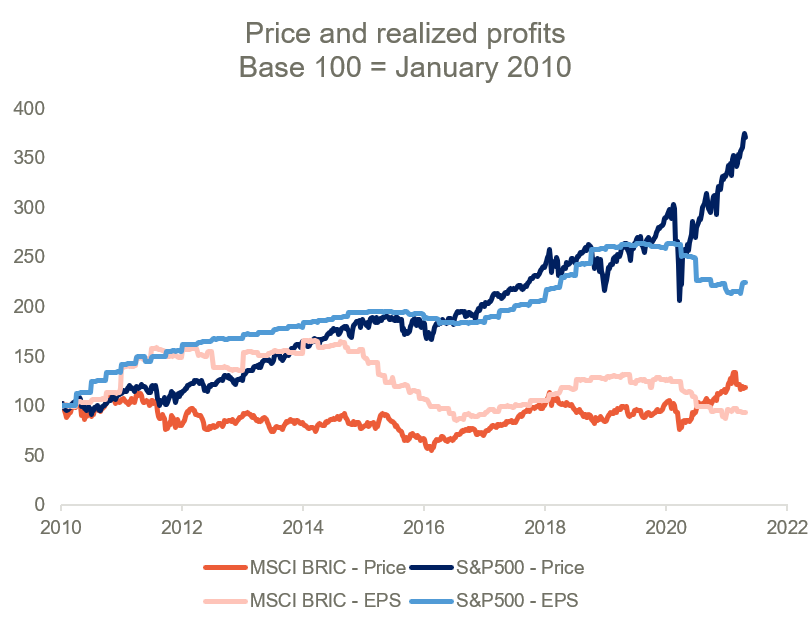 The reasons of this incapacity of companies in BRIC countries to monetize the higher economic growth into profits are multiple. We can cite a few such as governance issues (significant influence of the state via majority or minority stakes), institutional issues (corruption, inefficient legal framework), structural headwinds (productivity of the workforce, access and cost of financing) or cyclical adverse effects (heavy dependence on the commodity cycle for some countries).

On the American side, the ability of corporations to monetize economic growth into high profit growth is exceptional and is not found anywhere else in the developed world. A more detailed analysis by sector shows that it is the most globalized players and those operating in the information technology sector who have been able to increase and / or maintain a very high profitability over the past decade.

The graph below shows the evolution of the financial profitability of the S&P500 and of the MSCI Emerging Markets index. For the analysis, we have split each index into two sub-indices: the first includes the consumer, industrial and information technology sectors and the second, the other sectors (finance, oil, etc.). 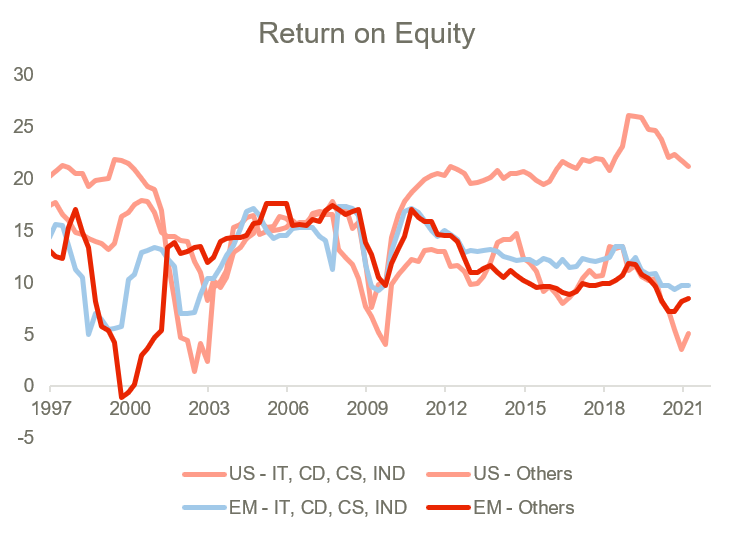 This graph illustrates very well the profit leadership of American multinationals (from McDonalds to Intel). What to think about it now? Is this leadership definitely granted? Could companies in emerging countries converge towards the profitability standards defined by their American competitors?

THE EQUITY INDICES OF EMERGING MARKETS HAVE CHANGED

The indices of emerging countries have suffered for a very long time from their overexposure to poorly performing, almost regulated sectors such as utilities, telecommunications and even banks. The profitability of these sectors is structurally low and translates therefore in lower profit content at the index level.

The lack of new companies, from the technology or consumer sectors, was a shortcoming to their stock market performance.

However, there is something new about this. The graph hereafter shows that emerging indices have changed. We present the sector composition of the MSCI Emerging Markets index over time.

Its status of value index is over now. The semi-public sectors of the old economy (oil, finance and utilities) represent today only one third of the index against 50% for the information technology, consumer and health sectors (versus a small quarter fifteen years ago). 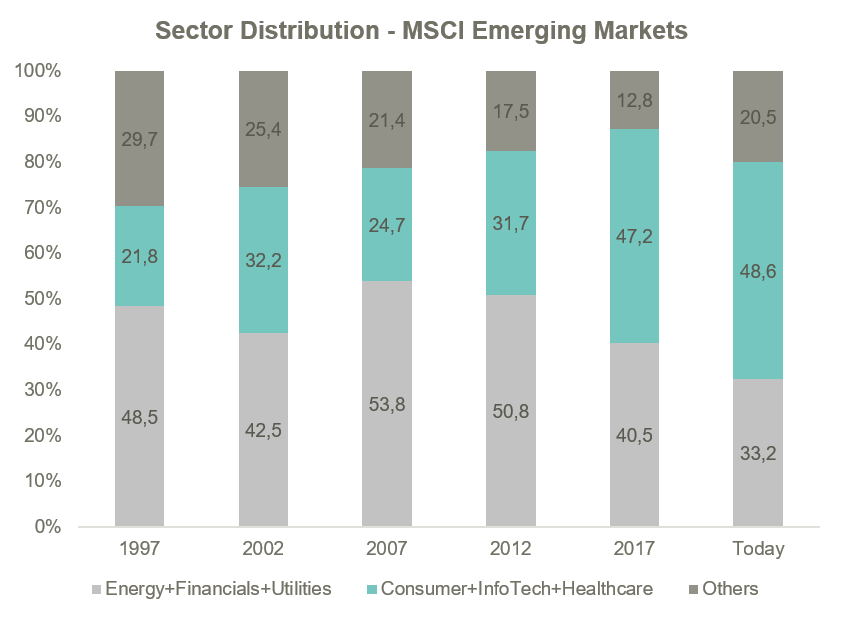 Thanks to this structural change, the profit content of the growth in emerging countries is certainly higher than before. With the onset of a new economic cycle following the end of the health crisis, a positive benefit of the doubt is setting in for this asset class.

WHAT IF JOE BIDEN KEEPING HIS PROMISES?

In the meantime, in the United States, things are also changing. Joe Biden, the new American president was elected on a disruptive program. It marks a break with the policy of its predecessor and more generally, a break with the trickle-down economics approach (which favors capital return). One of Joe Biden’s slogans that can still be found on his website is: “Trump rewards wealth, Biden rewards work”.

His willingness to raise the minimum wage to $ 15 and to raise corporate taxes has, on paper, the potential to distort the GDP’s distribution to the advantage of wages and to the detriment of profits.

Thus, the Biden presidency could be one of strong economic growth, supported by massive public investment plans. But paradoxically, it could also be that of lower profit growth, due to this political will to better redistribute the fruits of growth.

All in all, this new cycle which begins could be that of emerging indices after several years of underperformance. In the absence of a monetary or financial shock (the currency historically remains an key variable for the performance of emerging indices) the stronger growth of emerging countries could ultimately lead to better stock market performance. It would be a new phenomenon but consistent with this idea of higher profit content.