The presidential elections will be held in a few months in France and one can be sure that the candidates will use their usual dramatic rhetoric to describe the French economy. We will hear words like “economic downgrading”, “lack of competitiveness”, “lack of reforms”, and so on. It is not risky to bet that the French trade deficit will be put forward to illustrate this declinist discourse.

And yet … Our role is not to position ourselves in relation to this debate but to recall some facts on the trade balance, to recall what a deficit represents and what can be concluded from it. 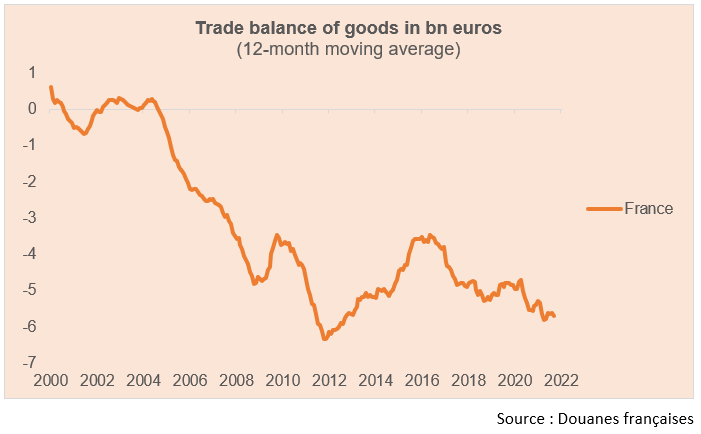 France has had a deficit in the external balance for about fifteen years. In 2021 it should represent around 2% of GDP (19% for exports and 21% for imports).

On the vie-publique.fr site produced by the DILA (Directorate of Legal and Administrative Information), a directorate attached to the Prime Minister’s services, we can find the following comment :

“The main reason for the trade balance deficit is France’s lack of competitiveness. The number of exporting companies remains insufficient compared to other comparable European countries such as Germany. In France, the lack of medium-sized companies (between 250 and 4,999 employees) to establish themselves in foreign markets is often presented as one of the causes of the foreign trade deficit.

Other weaknesses in French foreign trade:

poor geographic positioning: exports are not geographically diversified enough, France does most of its trade with the countries of the European Union (59%);

higher wage costs in France would also contribute to the deterioration of France’s competitiveness. French products are less competitive than those from European countries with lower labor costs, such as Spain.“

It is quite amazing to read these explanations. This shows how entrenched it is with many observers that a trade deficit illustrates economic weakness and in particular a lack of competitiveness.

The other European countries

Before we get into the analysis, let’s take a few moments to look beyond the borders, to see if our neighbors are doing any better. And if competitiveness is the key argument, it should be easy to guess which country has a deficit and which country has a trade surplus. 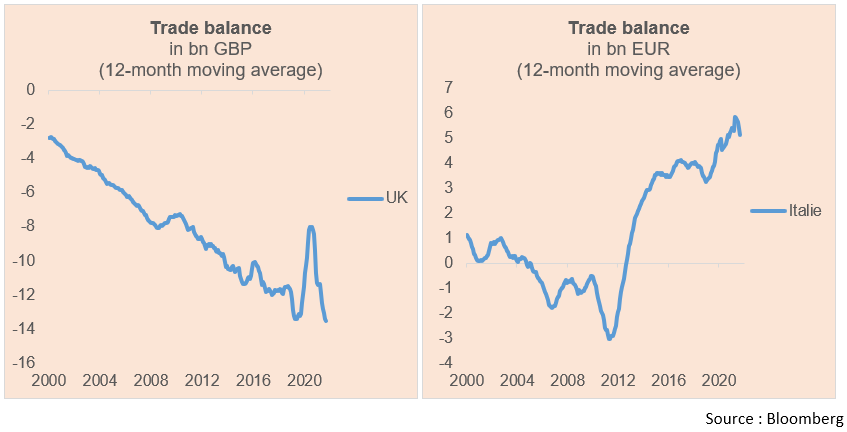 The argument of high wage costs which would hamper competitiveness is certainly the most far-fetched of all. It has no basis even though it is also often used to explain the high level of unemployment. The reality is quite different. If the level of wages was decisive in competitiveness then in Europe Greece and Portugal would be export champions and Switzerland and Sweden would be late. We are very far from that. 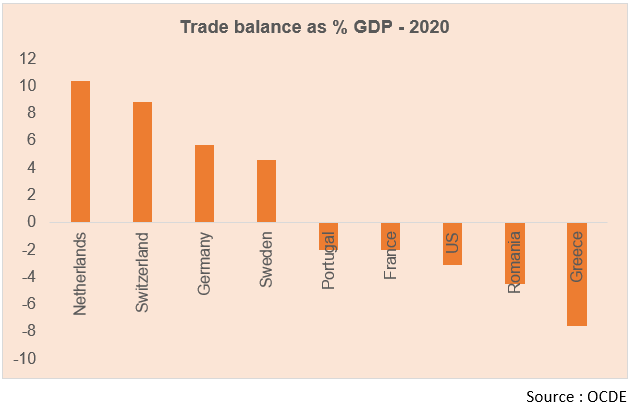 The balance of the trade balance is more complex to understand. It is the result of a combination of micro and macro factors. In terms of microeconomics, it is for example the choices of companies to produce locally or not that can influence the balance. In macroeconomic terms, a country with stronger consumption growth (higher income growth than its trading partners) will, other things being equal, lead to a trade deficit. Typically, the shift of the Italian trade balance into positive territory after 2011 does not correspond to regained competitiveness but simply to a collapse in domestic demand due to the euro crisis and the recession that followed. Italian imports fell by 17% between 2011 and 2014 while at the same time exports increased by more than 10%.

The first obvious explanation for France’s trade deficit is that, although we have a lot of ideas, we have no oil. The concepts of competitiveness are therefore irrelevant here: as long as our oil consumption is what it is today, this part of the deficit cannot be addressed..

The second explanation is illustrated with the below chart. 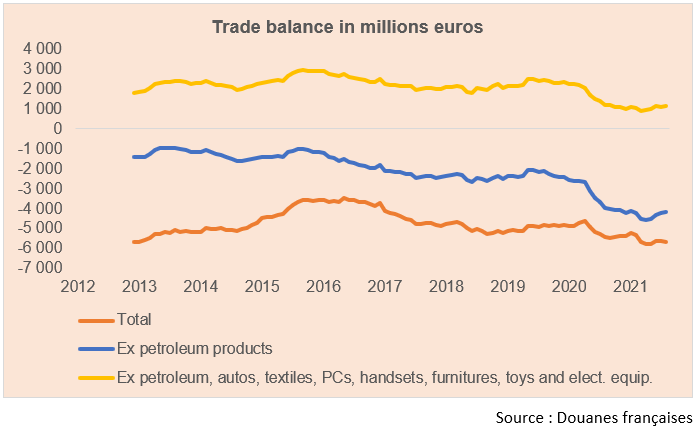 A significant part of the deficit comes from the manufactured consumer goods sector. It seems that the smartphones, toys, lights, clothes or dishwashers we buy are not made in France.

The subject of competitiveness is more relevant here. Why are sneakers made in Indonesia and China and not in the United States or France? It is possible that labor costs are one of the explanatory factors, but it is not even obvious. The cost structure of a pair of sneakers sold for 70 euros in stores shows that the cost of labor is very low, by a few percentages (1 or 2). Going back in history, Nike does refer to the benefit of cheaper labor to manufacture its shoes, but also – and perhaps mainly – the geographical proximity to the raw materials necessary for manufacturing. 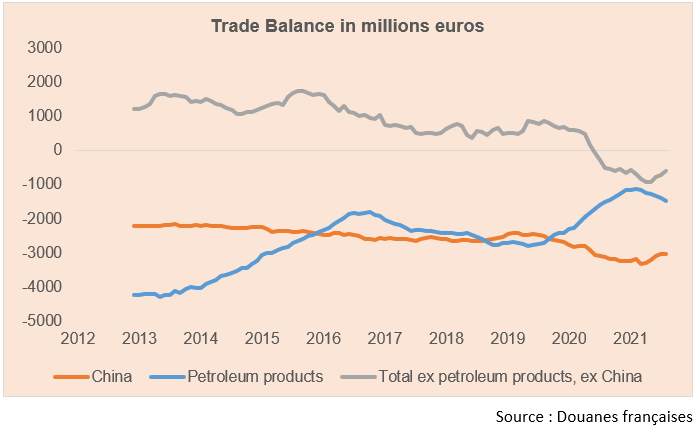 Many countries are in a situation similar to that of France, they import from China the computers or garden furniture they buy and despite everything, do not have a trade deficit.

The reason is that they have other sectors that make up for it. Switzerland has a trade surplus thanks to the products sector of the chemical and pharmaceutical industries.

It is difficult to claim that the French deficit reflects a deterioration in the competitiveness of French manufacturing companies, but the argument of the lack of leadership in certain sectors is more credible.

France – the  case of automobiles

France has strong expertise in several sectors, notably aeronautics, beverages, and perfumes and cosmetics. But these sectors do not have enough surplus to make up for the deficit in the durable consumer goods sectors.

The French problem really stems from two sectors: metallurgy and the automobile industry, which have significantly degraded the trade balance for more than 10 years. We could also mention the computer and electronics sector, but it is understandable that the increase in the deficit in this sector reflects above all the growing share of consumer spending on these technological products. 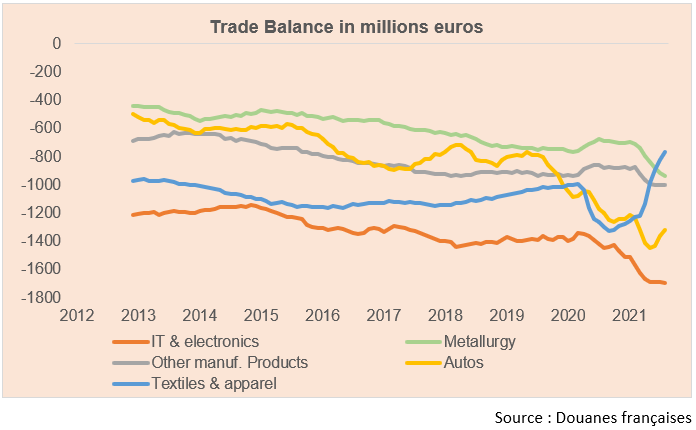 The graph above shows that the deficit of the textile & clothing sector has stabilized and even improved since 2016, while that of the automobile and metallurgy has continued to deteriorate.

The case of the automobile sector is very interesting because France is, without being chauvinistic, certainly the country which invented the automobile at the end of the 19th century. The automobile has always been a marker for the French economy. But the weight of the auto sector in the economy has fallen steadily since the 1970s, directly employing more than 350,000 people in 1978 against 171,000 today.

From a foreign trade point of view, the sector has long been in surplus but it fell into the red at the end of the 2000s. The relocations decided by French manufacturers have never ceased and the change has therefore taken place for them. around 2008/2009. The automotive suppliers resisted longer and became loss-making in 2016. Today, therefore, the entire sector contributes negatively to the balance of the French trade balance.

Although the first relocations were motivated by lower labor costs in Spain and the countries of Eastern Europe, the argument quickly faded. The cost of labor in the total cost of a vehicle depends on the model (entry level / high end) but remains rather low compared to the cost of raw materials (steel, aluminum, rubber), components electronics, interior equipment and depreciation automated manufacturing and assembly lines. The reason for offshoring therefore quickly shifted towards the opportunity to get closer to growing markets. Setting up a production site in emerging countries thus makes it easier to sell vehicles to residents.

The logic for the OEMs was the same. Rather than supplying only European manufacturers, the opportunity for Valeo to settle in China has been to serve Chinese manufacturers.

Thus, the French players in the automotive sector are doing well, but because they have abandoned France, the French data relating to the sector are bad. When Renault decides that the Clio V will be manufactured in Turkey and Slovenia in 2019, there is an immediate jaws effect: sales of Clio outside France no longer appear in exports but sales in France lead to an increase in imports. , irremediably widening the trade balance deficit. 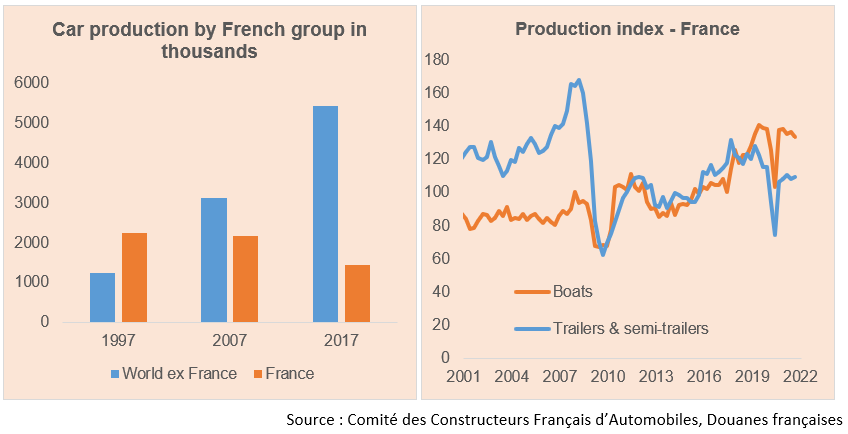 There are therefore microeconomic choices that have strong macroeconomic consequences. Also, it is interesting to note that the trailer, caravan, motorhome and boat sector has been able to maintain its production in France. How can this be explained when one might also think that French companies in these sectors would have an interest in getting closer to their foreign customers?

Two elements should be noted: 1) in the automobile, relocation mainly concerns small vehicles (the 208 is manufactured in Morocco and Slovakia but the 5008 is produced in Rennes and the DS7 in Mulhouse) which are less marginalized and for which a few hundreds of euros won make the difference. 2) vie-publique.fr is partially right to mention SMEs. Not that there is a lack of SMEs in France (this is a doubtful argument) but it is certain that relocations are mainly carried out by large groups.

Thus, in the nautical or motorhome sector, the average selling prices are quite high and with the exception of the two leaders (Bénéteau and Trigano respectively) the players are SMEs. This could explain why France has been able to keep the production sites of these two sectors on its territory.

France – the case of metallurgy

The metallurgy sector, another big contributor to the French trade deficit, offers a rather similar story. Moreover, the automotive sector is the second largest customer in the metallurgical sector behind construction. The interest of metallurgical groups in offshoring is understandable. If we study the first French player – ArcelorMittal – we see that it extracts hardly any iron ore in Europe (only in Bosnia and Herzegovina) but in America and Central Asia (Kazakhstan). That production sites are moving away from France to be closer to both iron ore mining mines and customers is not without meaning.

Also, as the graph below shows, the sector has always suffered from structural overproduction. While competition in emerging countries was getting organized, offshoring was a response by French groups to this double problem. 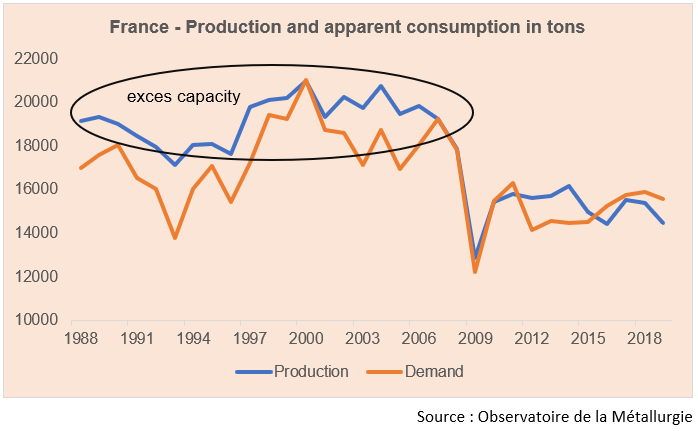 Finally, the trade deficit in the metallurgy sector does not really come from the steel sub-sector but from the “non-ferrous metals” and “hardware” sub-sectors. The first follows the same logic as the hydrocarbon sector and the second would be compared to that of toys (durable consumer products with low added value that can be outsourced). 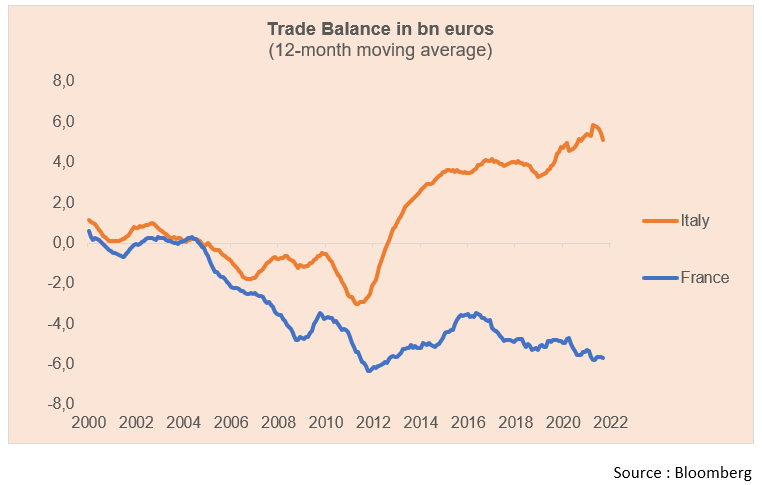 It would be very simplistic to explain the deterioration of French foreign trade by a lack of competitiveness. Italy is, we repeat, a good counterexample. We understand that the subject is complex and that it combines macro factors (good performance of domestic demand) but above all many microeconomic factors.

To conclude, a country’s external balance is not an indicator of the health of its economy but above all reflects microeconomic choices and / or macroeconomic strategies (the case of China for example). The competitiveness argument is very fragile and only marginally explains the relative positions of countries. On the other hand, the production of raw materials can be a strong explanatory factor (the case of Norway, Russia and Australia, for example).

The subject is however interesting from an ecological point of view. If the performance of an economy is no longer measured only by GDP but incorporates its carbon footprint, then the intensity of trade with foreign countries, especially those most distant, becomes a serious subject. And since ecology is a serious subject, it is ultimately good that politicians are concerned about this trade deficit. If economically the relocations do not seem justified, ecologically they are more so.